I've been exchanging emails with my buddy Francis. We've been discussing classical music. Much of the discussion has been about discerning the "clever stuff" that may not be immediately obvious when listening to a piece of music.

It's possible to listen to any sort of music and simply enjoy the sensation of the sounds. I do this quite often. However, there's also a hidden world of clever, sneaky and fun tricks that composers and performers use to bring about a performance. To use a mathematical analogy, it's the difference between just appreciating the beautiful picture of the fractal (below) compared to having the additional understanding of the simple and rather beautiful mathematics that bring it into existence. 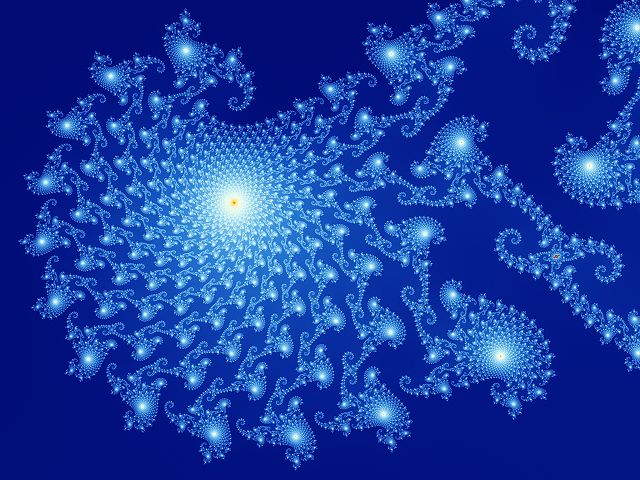 Put simply, sometimes it's fun to know exactly what's going on (in a musical sense). Unfortunately, in the context of classical music, this usually requires both historical and theoretical knowledge. So what do you do if you don't have this knowledge? In the case of Francis, an obvious starting point is to explore the classical pieces he already enjoys. When I asked him what classical recordings he owned he replied,

I have and quite like Faure's Pavane, and Pachelbel's Canon. Frustratingly though when I play them now they feel like cliches. This is partly because I know them from childhood, so there's nothing new to me. Partly because I don't know how to engage deeper beyond them.

So, I want to lift the curtain on Pachelbel's Canon and give you a sense of some of the non-obvious "clever stuff" happening in the piece. I assume no prior musical knowledge.

Rob Paravonian's humorous rant (above) centres around the fact that the poor cellist (playing the lowest part) plays the same sequence of eight notes 28 times. This is a special type of ostinato (repeated pattern) called a ground bass. As Rob demonstrates, the ground bass is a technique that's (over) used in a lot of pop music. In the Baroque period (the historical era during which Pachelbel was writing) composers used it as an anchor within a piece so that the listener had some sort of expectation of what was coming next. The clever bit is how the composer plays with our expectations by setting contrasting, surprising and clever melodies over the top of the ground bass.

In Pachelbel's case he starts by setting a very simple, regular step-wise melody above the ground bass. As the piece continues each new repetition of the ground bass has an increasingly complex setting above it until the melody is moving quite quickly, is rhythmically more interesting (it's uneven) and jumps around in pitch. Following this "climax" (yes, that is the correct term) the melody gradually transforms into a slower moving, simpler and more relaxed state that draws the piece to a close.

This is a sketch of the form of the piece at the macro (high) level. But there are other levels of "resolution" that can be viewed under our musical microscope.

For example, have you wondered why the piece is called "Pachelbel's Canon" and not "Pachelbel's Ground Bass"? Well, a musical canon is a contrapuntal technique where a single melody is played on top of itself with voices coming in one after the other. You probably already know several canons and have perhaps sung some at school: "Row, Row, Row Your Boat" and "Frere Jacques" are well known examples. In any case, the way a canon is performed is always the same: a first voice starts to sing or play the melody and, at some regular period of time later, N number of voices gradually join in one after the other and play the melody.

It is this "canonical" technique that Pachelbel uses. The piece is written in four parts: the ground bass and three melody parts. However, each of the melody parts plays exactly the same melody but offset by one repetition of the ground bass. So, not only does the melody mysteriously fit with the ground bass, but it fits with itself. Furthermore, Pachelbel has organised things so that the macro form of the piece (the feeling of a gradual build up to a climax followed by a relaxation to the end) emerges from such micro level interactions between the different parts.

All of the features I describe above can be heard if you listen very carefully. However, don't expect to hear them all at once! This is why so much classical music deserves repeated listening because there's always something new to spot! The following video is particularly useful because the Musanim project have superimposed a graphical version of the score that follows the performance. The ground bass is represented by the blue blocks at the bottom of the screen and the red, brown and yellow blocks represent each of the three melody parts. Basically, the vertical axis is pitch (how high or low a note sounds) the horizontal axis is time and colour represents the part being played (sometimes the colours change if parts play the same note). If you watch and listen very carefully you'll be able to spot the canonical relationship between each of the melody parts.

Hang on a minute, if there are only four parts in the piece why are there six performers..?

Obviously the cello is playing the ground bass. Each of the violinists is playing one of the melody parts. The first violin is on the left, second in the middle and the third to the right of the organ. Right of the organ? What's an organ doing in there and what on earth is that funky guitar like thing on the far right?

Well, these are the continuo group - a sort of Baroque-era rhythm section (the instrument on the far right is, in fact, a Theorbo - a member of the lute family of instruments). They follow the bass part (in this piece it's the ground bass played by the cello) and improvise harmonic "filling" in much the same way that a rhythm guitarist in a pop group or pianist in a jazz trio do.

Now, watch the performance again, but this time I want you to concentrate on what the performers are actually doing. Notice how they move a lot, swaying from side to side and often change where they're facing. Since they're all reading their parts they have to keep together in some way. Obviously they're listening very carefully to each other but they're also aware of each other's movements through the corner of their eyes. As a result they're able to get a sense of what everyone else is doing and collectively work as an ensemble. At certain points you'll see them glance, make eye contact with each other and even smile. This is another means of non-verbal communication the players use to keep their sense of ensemble (you see the third violinist do this about halfway through the performance). Finally, at the end when they need to coordinate the close of the performance everyone is looking at the first violinist on the far left to get a sense of how the music is slowing down and ultimately coming to a stop.

Each group works in a different way and watching an ensemble's group dynamics is yet another aspect of classical music that allows for repeated listening. It's fun to compare and contrast the different ways in which performers react to and perform a piece of music

I hope you enjoy listening!