Yesterday evening we held our first code dojo kindly hosted by Fry-IT (who also supplied the pizza and beer). About 20-30 attendees turned up. Our aim was to generate a directed graph of a social network obtained from Twitter (something I blogged about before). You can see how we did by visiting the GitHub repository for the code dojo, the result of which is the image at the top of this blog post.

So, how did it go? Well, on the whole I got the impression that people enjoyed themselves but that there are many ways we can improve the "format". Tim Golden's blog post about the event pretty much sums it up.

For what it's worth, here are my observations:

Happily, most of the attendees said they would come to a second code dojo. So, in light of the list above, here's what we agreed last night:

Get your thinking caps on for future code dojos: tasks, format changes, suggestions and ideas are all most welcome. I like the idea someone suggested of a team based dojo, reminding me of a Scrapheap Challenge like competition but for developers (imagine pitching that to Channel 4).

Finally, what does a neat table of pizza and beer look like after being attacked by Python hackers…? 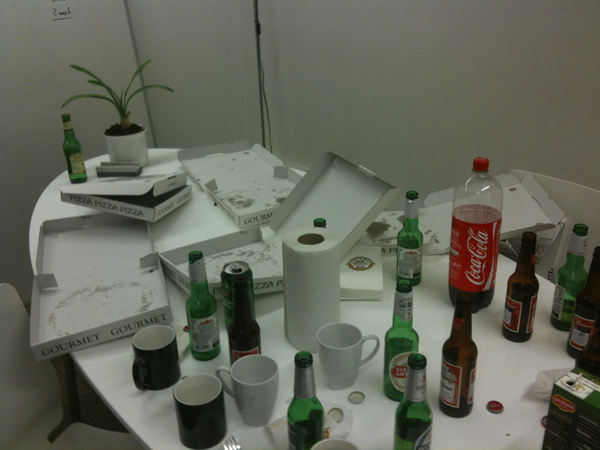