MicroPython, a project by my buddy Damien George, is a complete reimplementation of the Python programming language for microcontrollers and embedded systems. Put simply, it's Python for extremely small computers (and I once wrote a book about it). CircuitPython, a friendly fork of MicroPython, is sponsored by the fantastic folks at Adafruit, a company who make playful and easy-to-use "hackable" technology while promoting a welcoming, friendly and diverse community of makers. They are led by legendary founder and electrical engineer extraordinaire, Limor "ladyada" Fried. CircuitPython is MicroPython for Adafruit's line of boards and with a consistent API for accessing the numerous bits of cool hardware you can use with such devices.

I was privileged to recently complete a block of work for Adafruit: I've written a CircuitPython module called adafruit_radio that makes it easy for Bluetooth enabled Adafruit boards to communicate with each other. The API is a simplified version of the work myself and a number of other volunteers did on the equivalent functionality for the BBC micro:bit (here's a tutorial I wrote for the micro:bit radio, to make electronic "fireflies" blink at each other over Bluetooth).

In the new Adafruit module, sending a message is as simple as:

Receiving requires a loop (to allow the device to keep checking for messages), but is equally as simple:

The best model for thinking about this module is that of kids' walkie-talkies. Each radio is tuned to a certain channel upon which it broadcasts and receives. If you send a message, anyone else listening in on that channel and within range will receive it. You'll also receive messages broadcast on that channel from others within range. This is an ideal network topology because it's both familiar yet capable since other, more specialised, network topologies can be built on top of it. There is potential for users to grow from a simple "walkie-talkie" model of networking to something more sophisticated and of their own devising. 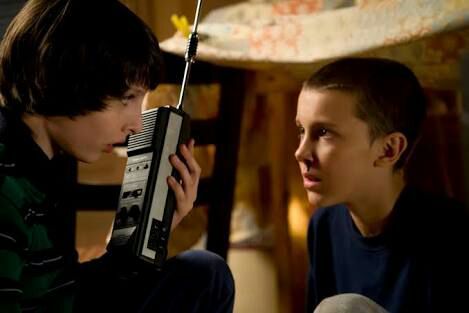 The channels in the module are numbered between 0-255 and can be set when creating a Radio object (the default channel number is 42 in honour of Douglas Adams, who saw so much humane potential in new technology yet mischievously warned of the polluting effect of technology for technology's sake via the inept work of the Sirius Cybernetics Corporation):

Alternatively, you can change channel at any time via the Radio object's configure method (continuing the example above):

Finally, in addition to sending strings of characters it's also possible to send and receive arbitrary bytes:

Receiving bytes gives you the full context of the message expressed as a Python tuple consisting of three values: the raw bytes, the RSSI reading (i.e. strength of the signal, from 0 [max] to -255 [min]), and a timestamp representing the number (and fraction of) seconds since the device powered up, as demonstrated in the following REPL based example:

That's it! You can find the code in this GitHub repository. Special mention and thanks must be made to Adafruit's Scott Shawcroft and Dan Halbert who wrote the Bluetooth API I used. Because of their work I was able to create my module with less than a hundred lines of Python (at time of writing). Thanks chaps!

Armed with this context, I'm going to explain why and how I created a comprehensive test suite for the adafruit_radio module.

I'd summarise my approach to testing as follows:

The problem for developers writing for CircuitPython is that such code is usually to be run on microcontrollers with certain hardware capabilities. Yet such code is invariably written on conventional computers running operating systems such as Windows, OSX or Linux. The only way to know your code works is to try it on the target device. This is, to say the least, laborious compared to having the benefits of running an extensive test suite in a matter of seconds.

Having written my small and simple adafruit_radio module I found myself missing the benefits of a comprehensive test suite. After asking around, I found most Python modules for CircuitPython don't have a test suite and there hadn't been much (if any) exploration for how to address this. Scott suggested I add what I thought best in terms of testing to my module.

I wanted my solution to meet the following requirements:

I decided to focus on using an existing, well known and mature Python testing tool called PyTest (the creation of another friend of mine, the extraordinarily prolific and very thoughtful Holger Krekel). The advantage of using PyTest is that it has a large number of plug-ins that are both useful and familiar to a large number of Python programmers. One such plug-in I use a lot is the Pytest coverage tool, which makes it easy to spot areas of a code base that are not exercised by a test suite. PyTest also has a well defined mechanisms to extend it to work in specialist testing situations (such as our own CircuitPython based context).

As far as I was concerned, using PyTest met the first two of my self-imposed requirements. I was left with the final problem of dealing with CircuitPython only modules that wouldn't work on a conventional computer.

This is where I need to introduce the concept of "mocking" in a test suite (as in "mocked up" rather than poking fun). Mocking is a way to replace parts of your system under test with "mocked up" objects and then make assertions about how such objects have been used. Thanks to another friend of mine (the huge hearted, funny and rather hairy Michael Foord), mocking is built right into Python's standard library.

My idea was simple: automatically mock away those parts of CircuitPython that don't work on a conventional computer. Such objects give the developer a way to check and ensure the module under test is working as expected with CircuitPython. It's even possible to specify how such mock objects should behave under certain conditions (such as when they may be the source of some sort of data which the module under test will use). However, this aspect of mocking should be used with great care -- more on which later.

If a developer creates a conftest.py file in their test suite PyTest will import it before running any of the test code and use various functions found therein to configure the test suite. For example, if PyTest finds a function called pytest_runtest_setup in the conftest.py file, then this function will always be called immediately prior to any test function. Just what we need!

My conftest.py file is very short and simply mocks away named aspects of CircuitPython which cannot be run on a conventional computer immediately before any test is run, via the aforementioned pytest_runtest_setup convention.

It means I can write conventional looking PyTest based unit tests like the following:

Some things you should know: radio.ble is a mocked away part of CircuitPython. As a result, on the first line of my test function, I've been able to tell the mock that the result of calling the start_scan method is an empty list. Then I can assert that the method I want to test (the radio.receive_full method returns None in this context. Furthermore, I'm able to check in the final two statements of the function that the start_scan method was called with the expected arguments, and that an additional stop_scan method was called too.

When I run the test suite, I see something like this:

Note all the feedback about code coverage..! Neat, huh?

A mock object, by its very nature, is a mock-up of something else... it's not the real thing..! So what happens when the real thing (that has been mocked-up in the test suite) changes? For instance let's imagine that the result of a call to start_scan is no longer an empty list, but something else. The tests will still pass because the mocked-up object doesn't reflect the real object, yet when the module under test is used on a real device with the changed version of CircuitPython then it won't work correctly.

This is obviously not a good situation and why I mention mocks should be used with great care and attention.

The most obvious solution is for the developer in charge of the test suite to be careful and check API updates in the release notes of the modules being mocked away. However, this becomes a burden if the test suite mocks away a huge number of modules. It's also open to human error.

There are several ways to mitigate this problem, but because it's early days I've not been able to investigate these potential solutions properly. The best I can do at this point in time is shrug my shoulders, say things are under construction and invite folks to dive in and help. Our community would certainly be enriched by such collaborations.

In conclusion, I'm quite pleased with this first step in equipping CircuitPython modules with comprehensive test suites. Yet there's still plenty to do -- most notably, ways to address the problems mentioned with mocking.

As always, comments, constructive criticism and ideas expressed in a friendly, collaborative and supportive manner are most welcome.